Order by 3PM CST for Same Day Shipping*
Shipping As Low As $1.99
100% Live Inventory, No Back Orders

Add to wishlist
RBF (Reinforced Buffer retainer, Forward Controls) is a strengthened AR buffer retainer machined with Swiss machines from 17-4 stainless steel bar stock, and heat treated to H900 hardness.  RBF features a reinforced tip that is 10% larger (0.102) than TDP spec (0.093).  We don’t want RBF to be timed (as the case with a rectangular tip), so RBF retains the TDP buffer retainer’s versatile round tip, and is installed per TM instructions.  10% is as much as we could increase before encountering receiver extension timing incompatibilities.
When all the systems in an AR function properly, one could argue is that a reinforced buffer retainer isn’t necessary.  We agree, except mix and match parts from different manufacturers and their varying adherence to TDP specs, tolerance staking is far from the exception.  Many of us have had this inexpensive part break and toss its tip into the lower receiver, usually in the trigger group and cause a jam.  RBF’s billet construction and reinforced tip aim to mitigate this, it could be viewed as cheap insurance, even if the way we make it is anything but cheap 🙂
RBF has a light bronze sheen after heat treat.  Ever practical, we do not coat or polish it, as it is stainless steel and an internal part.
RBF is compatible with AR15/M16 milspect rifle and carbine receiver extensions, as well as Vltor A5 system receiver extensions.
NOTE:
* Always wear eye protection while handling springs under pressure, spring loaded pins and detents.
* Receiver extensions (REs) timing on the receiver can vary.  While the an RE can rotate past dead center (with the RE covering and retaining the buffer retainer) by 45 degrees or more on one receiver, it might only be able to do 15 degrees or less on another.  Also, different REs have different timing values. 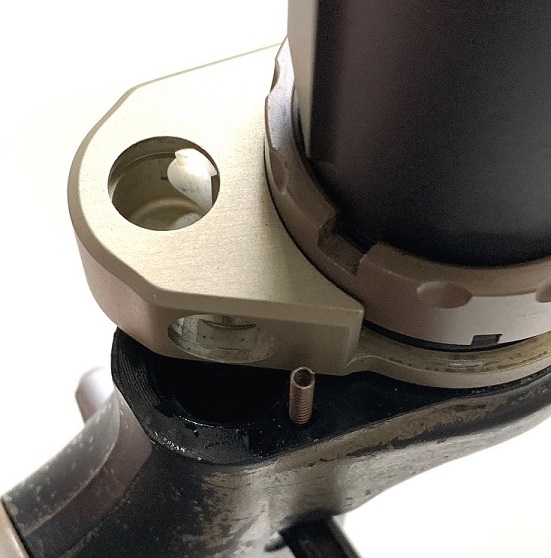