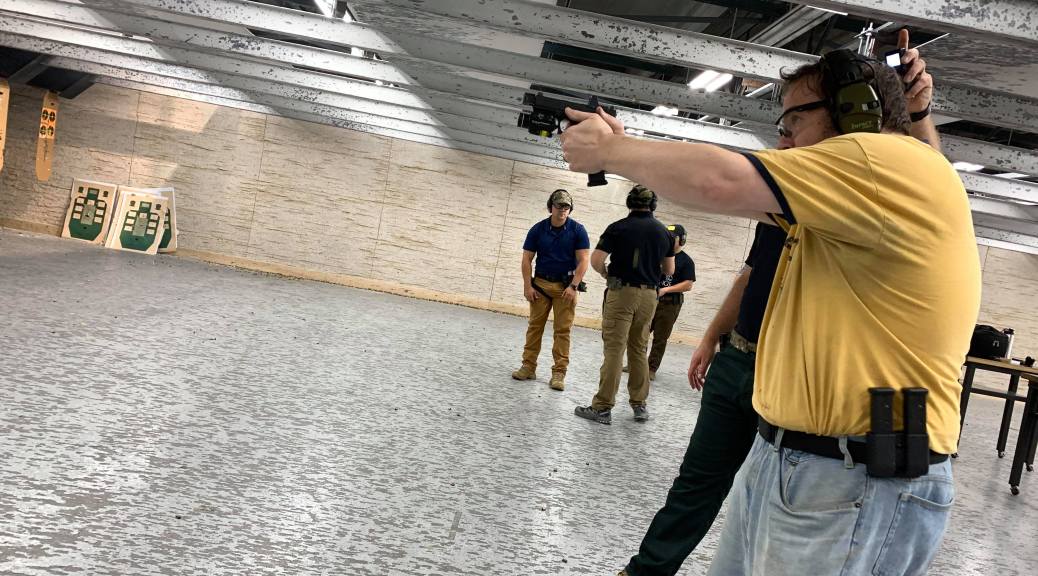 One constant refrain I’ve had for at least a year is “where are my advanced Sunday classes?” In what I assume is part of a concerted effort to get me to shut up, Green Ops finally relented and offered a Defensive Pistol II clinic this past Sunday night. My inside information is that they will be offering more of these advanced clinics next year, and even a proper Sunday all-day class! (Readers: the moral of this story is that if you want something from trainers, step number one is to simply ask politely for it! You might even get it!)

This was my first time shooting a level II with Green Ops, and you can read on for what I thought of it!

(Full disclosure: I got a small class discount for AARs I previously wrote. I didn’t ask for it, and I’d still be taking their classes without it. The amount of money in question is trivial to my situation, and thus had trivial impact on this AAR – or so I hope. I’m also an admin on their alumni group, mostly because I whined at them to start it in the first place.)

In an effort to changes things up a little, I am going to try using the Primary & Secondary AAR format for this post. I hesitate to call it an industry standard, but it covers all the bases pretty well, and it makes a little more consistent with my peers. I am going to add a couple things to it that I think it misses.

Class Description: From the website: This continuation of our Defensive Pistol series includes additional drills, and live fire malfunction clearance drills. We will begin with a review of the topics and fundamentals of marksmanship from Defensive Pistol I and move into more advanced drills. You will continue to improve your pistol handling skills while reinforcing the fundamentals of marksmanship. Timed drills will help you learn the balance between speed and accuracy.

Instructors: Bios are on the Green Ops website. Chris Alvarez, Fred Moore, Jo’shua Shaw, and “Ace” (real name classified). Chris is a former SF guy. Fred has some .mil experience and is a full-time LEO. Josh is a master-class USPSA shooter. Ace is retired military and also shoots some competition. Overall, good set of guys running the show.

The reloads were a slightly risky play; I had experienced a couple cycling issues with them previously (they were from when I was tweaking the press), but I spent some quality time gauging the ammo before the class to be sure they’d all chamber correctly. They did, and my only problem was a lone stovepipe. I walked away very happy with their performance, which was far more consistent than the Winchester 9mm NATO I was previously using. Total round count… hard to say. I’d guesstimate ~200 rounds.

I did experience some slight pin walk with the pistol; I am going to break out a soldering iron and fix that problem by tightening up the hole. It didn’t seem to affect functionality.

The Graith belt worked well and is very high quality, but I think I was overtaxing it by making it do OWB duty. It is probably time for me to suck it up and start using my battle belt for these classes; I have been getting my holster situation squared away for that.

(Side note: I wore what I thought was a faded yellow shirt that looked like it was NEON YELLOW in all the photos. I’m going back to wearing military colors next time. Ugh.)

Preparation Drills: Some dry-fire on a semi-regular basis, plus some live-fire holster draws the hour before class. I was really working my transitions on dry-fire, and I felt like I saw the difference. My index still isn’t where it needs to be.

Author’s Previous Experience: Civilian with no military or LEO background. Have shot some competition, but nothing worth bragging about. Training junkie since April 2018, and have averaged a class a month since then. I am OK with a carbine, pretty good with a pistol, and mediocre-to-average with a shotgun.

Class Demographics: There were fourteen students. Racially diverse, but no women. Guns were a mix of striker-fired guns and DA/SA. Someone was running something bigger than a 9mm, but I didn’t stop to inspect the casings to determine exactly what. Most everyone was running OWB rigs with battle belts. No equipment failures that I saw.

Training Day 1 (Evening): Class kicks off with a classroom session. We went over medical, and then had a 15-20 minute lecture from Josh about dry-fire. I thought he did a pretty good job of explaining the various benefits and drills of dry-fire. Fred then delivered a slightly-updated use of force brief. You could summarize it as “don’t shoot people unless you have to, and don’t put yourself in a situation where you have to”, which is not bad advice to live by as it goes.

After the classroom session, we migrated out to the range proper. After getting the targets and tables to where they needed to be, we put empty guns in our holsters and got ready for the first drill… the infamous dot torture target at the three yard line.

I have shot dot torture probably a dozen times, so I knew what I was getting into. We started off by dry-firing at circle 1, and then launched through the entire dot torture target in a series of live-fire mini-drills. I got a 44/50, which isn’t really anything to write home about, but this was still a notable improvement over some of the targets I saw, which looked like they had just taken 5 or 6 cartridges of double-ought buckshot.

From there, we moved on to some controlled pair drills at 7 yards and 10 yards on what I think were 5″ squares. This is like point blank shooting with a red dot pistol, so I tried to challenge myself to work on my draw speed and consistency, plus getting that follow-up shot quickly. Admittedly, it is much tougher to do this with irons, which probably explains why I never bother to use irons anymore.

I am a little fuzzy about the drill we did after this. I THINK it was shoot-1-reload-shoot-1 into the alpha. I only remember being impressed that I hadn’t dropped any shots on the target by the end of it.

At this point, we shifted to bill drills! Bill drills are fun, but I will confess that I have no idea what relevance they have to defensive shooting. Having the cops ask you why you drew and emptied six rounds into a guy within 2-3 seconds does not seem like a conversation you want to be having. I abused the situation a bit to go “stupid fast” on the first few runs – hard to do when the backstop is 50yds away, but easy at 7 yds – and then settled it down to have a cleaner run on the last go-around. As usual for me, I didn’t crank my support hand grip quite as much as I should have, leading to more horizontal dispersion than I preferred.

EDIT (10/10/2019): I was told that the drill was included due to operational experiences with 3 rounds not stopping people. So perhaps I’m being unduly critical here.

The bill drills lead nicely into some simple movement drills. Walk forward four yards while shooting, walk backwards four yards while shooting. In theory, this was supposed to be six rounds for each half, but there was no way I was going to waste the opportunity to see how fast I could while moving, and emptied a full 21rd mag on each forward/backward set.

Finally, we did some Blake drills, followed by a friendly competition (which I lost because I screwed up my index on the draw – ah well). The drills were on three full-sized profile targets, so I just went full speed, accepted a so-so point of aim, and burned them down. My best time was 2.31 seconds, which was a surprise even to me – transitions have never been a strong point of mine, but I guess dry-fire does work.

Class Debrief: Debrief was short. There was a class picture, which made me further regret my clothing choices. We put ourselves in whatever armed or unarmed condition we needed to be in, and then brought our stuff and ourselves to the back of the range. Chris urged us to dry-fire more, talked about upcoming events, and then handed out certificates.

After Class: No after-class activities – it was 10:30PM, and people needed to head home. Green Ops does send out an email with some info and the drills a couple days later, which is 1) helpful to writing AARs like this and 2) good for that dry-fire practice at home.

Conclusions: I liked the class a lot. It was a nice bump up from Defensive Pistol I in difficulty, and I learned a few new tricks from it. I think you could fairly critique it for missing some stuff on their syllabus – no barricade, positional, or turning work. But it’s also the first time they’ve offered the class in clinic format, so I think there’s going to be some evolution and improvement. If you’re like me and Sundays are your training day, this is very easily one of the better bets out there in the NoVA area, and I’d encourage you to sign up for the next go-around in 2020.

The other point I want to make is that what you get out of a class is sometimes as much up to you as it is the instructors. As long as you’re not being disruptive, you can really focus on whatever it is you want. Want to dump more speed into your accuracy drill until you fail? Your call. Practice tac-reloads into of emergency reloads? Knock yourself out.